Provisioning your ESP8266 with our server

After you have loaded the app on your smartphone and flashed the initial bin file firmware to your ESP8266 you need to complete the provisioning process.

This is all done from your smartphone and the process is as follows:

Sounds simple eh? We will add screenshots and tips for a smooth provisioning process within this category.

PLEASE NOTE THE GUIDE BELOW IS FOR ANDROID AND THERE ARE SOME SUBTLE DIFFERENCES FOR IOS.

The first time you use the app you will need to create an account on the ESPproMon cloud based server as shown below. [Images 1 and 2] 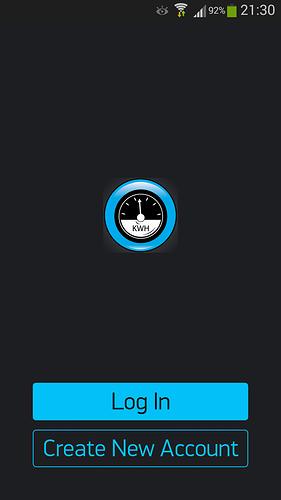 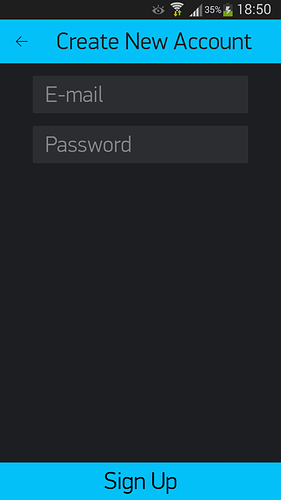 ESPproMon Provisioning create account on server screen.png720×1280 28.4 KB
Scan your chosen QR code image as shown in the What’s new in version 1.0 of ESPproMon? thread. Then you will be guided through connecting your ESP8266 to the server. First stage is to select your normal WiFi Access Point and enter the password. [Images 3 and 4] 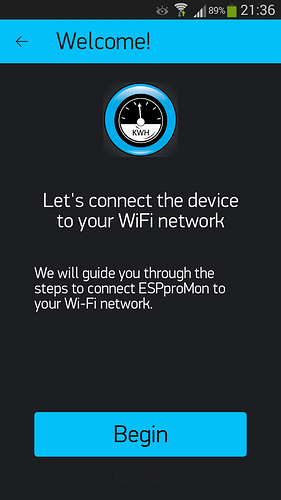 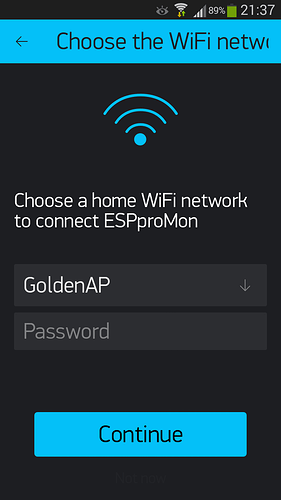 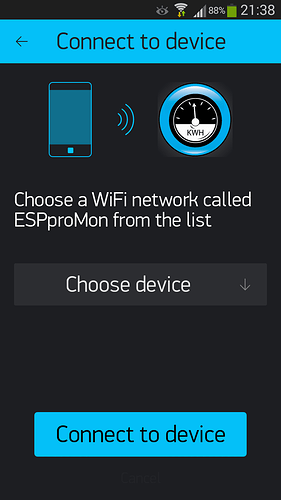 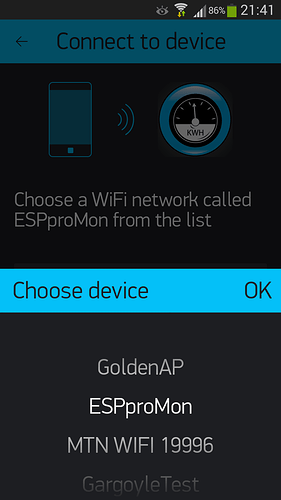 ESPproMon Provisioning select ESPproMon device screen.png720×1280 88.9 KB
The rest of the process is automatic and will display the following screens. [Images 7 and 8] 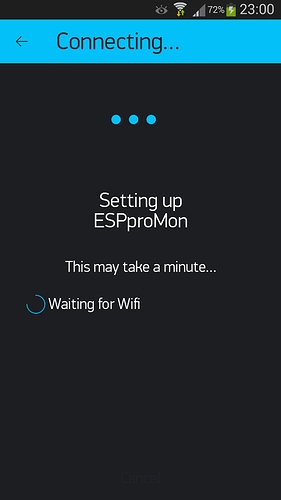 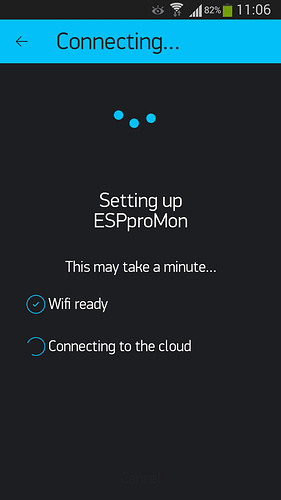 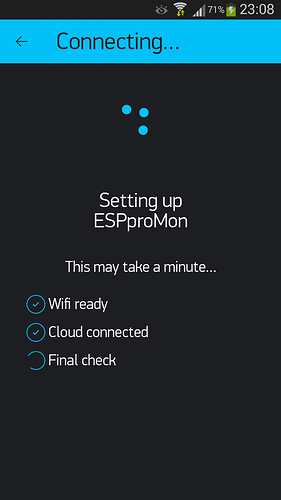 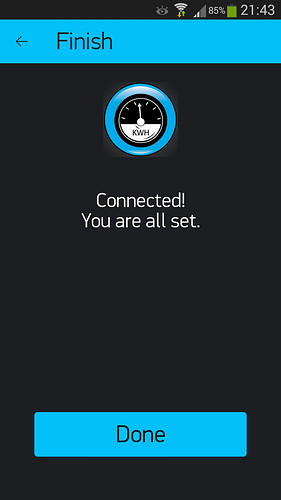 The Provisioning process is quite complex and I will provide some tips in the posts that follow which will ensure a smoother process for you.

You will notice I have added an image number pair to the previous post so [images 1 and 2] and [images 7 and 8] for example.

If you have any problems with the Provisioning process please indicate which images you saw or didn’t see etc and we will advise accordingly.

Top tips for smoother provisioning of your ESP8266 with the ESPproMon cloud based server.

In our next post we will provide details regarding the status of the on boards LED(s) for the WeMos and NodeMCU during the provisioning stage and beyond.

The WeMos has a single on board LED so there is no confusion when we refer to the ESPproMon status LED. The NodeMCU has 2 LED’s as shown in the image below. 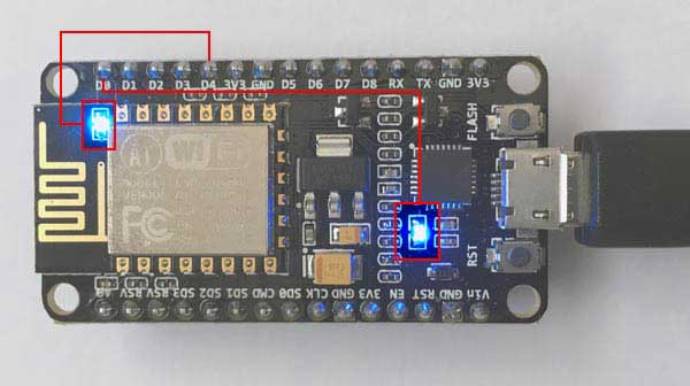 Once you have flashed our firmware to your ESP8266 the LED will blink, very faintly, at 1 second intervals. You need to look closely to see the LED blink but it should be there. This is to tell you that the firmware has loaded correctly and the ESP is ready to be provisioned to our server.

After you have completed the provisioning process the LED will blink, again very faintly, at 5 second intervals and this is the normal status for the LED.

If the status LED is not blinking at all then you should power cycle your ESP and it will blink at 1 or 5 second intervals as indicated above.

This is probably a good place to mention the ESP’s EEPROM. A small flag is set in your EEPROM when it has been provisioned with our server and it disables the ESP’s WiFi Access Point. If you need to enable the Access Point you can manually clear this flag in EEPROM by shorting a wire (or resistor) between ground and GPIO 5 (D1) for a few seconds.

The status LED should then change from the 5 second blink frequency to 1 second, indicating the Access Point is now available and the ESP can be re-provisioned. Please note EEPROM is a special area of memory which is not overwritten when you flash a new bin file to the ESP.

Clearing EEPROM can also be done within the app by pressing the red, CLEAR EEPROM button at the bottom of the SETUP page. When you press the button the label will change to “Press Again” to ensure the button wasn’t pressed by mistake. The terminal in the TARIFF page will confirm the EEPROM was cleared and you can then re-provision your ESP.

Use this tip and you might not need any of the following tips. When you see image 7, put your phone to sleep i.e. press the power button on most smartphones and then press it again to wake it up. You should see that Provisioning has now moved on to image 8.

At present this tip has a 100% success rate at provisioning.

Just adding an EEPROM clearing sketch that also has OTA functionality.
You should only need this sketch if you need to bring up the Access Point and you can’t use the other methods that we recommend (shorting D1 GPIO 5 to ground for a few seconds or the EEPROM clearing options in the ESPproMon app).

Ensure you enter your WiFi credentials in the sketch before flashing this sketch via OTA or a serial connection. If you use serial ensure you manually reset the ESP after flashing. Once you have the sketch on your ESP you should see a device connected to your router called EEPROMcleared. With the IP allocated to this device you can then do an OTA update with our latest firmware and proceed with provisioning to our server etc.

@karthi welcome to the ESPproMon community site. Are you using Android or iOS?

What problems are you having with the provisioning?

hi Costas,
i successfully provisioned and log on to the APP. on the other side i have PZEM-004t module which is not responding when i tried with Arduino uno, MEGA 2560 and esp8266 12E. i used this library to communicate with PZEM, https://github.com/olehs/PZEM004T .
I need your help to make it work.

Have you worked through the guides that tell you which pins to connect from the Pzem to the ESP8266?

Do you know how to wire up the Pzem and where are you picking up the 5V input for it?

pin which is 5V coming from from USB.

@karthi please upload a photo showing your Pzem and ESP all wired up.

ok. Now i’m in workplace, after 2hours i’ll reach my house will work on that.

thank you for your fastest response. 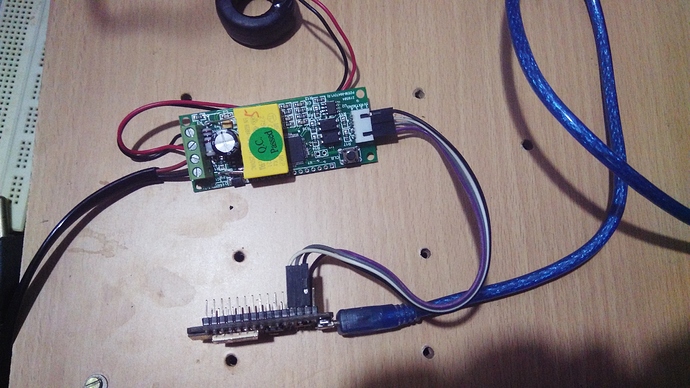 here is the pic of NODE MCU to PZEM

@karthi thanks for the photo. The TX and RX on the Pzem don’t go to the RX and TX pins on the ESP8266.

We have allocated specific GPIO pins for the RX and TX connections on the ESP8266.

I made the changes accordingly. i Flashed Node MCU with the firmware. now i want to register my device right?

You should be able to use the firmware without registering it. Once you know it all works then you can register it. 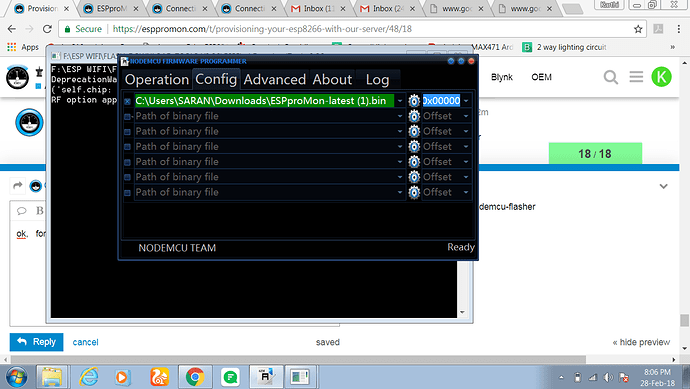 this Settings ok or i need to use esp8266 download tool?

That flasher should be fine but we have found some users don’t know what size their flash chip is and have wrongly used 1M when it’s a 4M.

Our firmware will run with an incorrect flash size but it will not store the required access credentials to interface with our server.